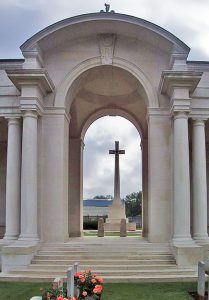 William enlisted with the Royal Marine Light Infantry as a Private, No 4540 on 7 April 1915.  Initially he was trained in the Ordnance Company, Chatham Division, stationed at Deal, and it was not until 14 November 1916 that he was transferred to the 1st Reserve Battalion, Royal Marine Brigade of the Royal Naval Division, Victory V Portsmouth. Earlier, in his training period he was stationed in the RND’s Depot and Training Camp at Blandford in Dorset. On Christmas Day 1915 he married Emily Eliza Watts there.  Emily had been born in Hammersmith in 1894, and in 1911 was living with her family at 17 Hunt Street, Latimer Road, Shepherds Bush.

A reorganisation of the Royal Naval Division resulted in the re-named 63rd (RN) Division containing the 188th Brigade which was organised along army lines and contained two RMLI battalions and two from the RN, Anson and Howe.  On 1 January 1917, William was transferred from the reserve to the 1st. Royal Marine Battalion when he first saw active service in France.  He would have been present at Operations on the Ancre 20.1.17, at Miraumont 17.2.17, battles of Arras – Capture of Gavrelle 23.4.17, (see also account of this engagement by Commander Walter Sterndale-Bennett), and the battle of Arleux on 28.4.17.  The British positions at Gavrelle were counter-attacked seven times with strong forces and on each occasion the German thrust was repulsed with great loss by the 63rd Division.  It was at this engagement that William was presumed killed.  His body was never recovered.

William Alfred Collett’s name is inscribed on Bay 1 of the Arras Memorial which commemorates 35,000 British, New Zealanders and South Africans who have no known grave.  His wife, Emily Eliza received his War and Victory medals.  While William was serving on the Western Front, Emily stayed with her parents and the rest of her family in Notting Hill, and it is from this address that she re-married Thomas Harold Willison, an engineer from Acton Green on 12 July 1919.

William and Emily had no children.