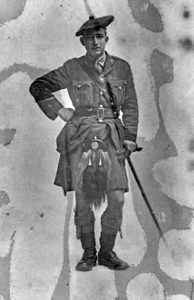 Charles Lowe was born in was born in 1848 in Balconnel, Angus. He was educated in Brechin, Angus, and studied at Edinburgh University and in Jena and Paris, graduating with an Edinburgh M.A. in 1871. When he married the youngest daughter of a London Auctioneer and Land Agent, Blanche Fitzhardinge Lye, born in 1856, in Kensington in January 1880, he had been already appointed as the “Times” newspaper’s Berlin Correspondent. The couple returned to Berlin, where their three children were born: Blanche Mary in 1882, Charles Edward Berkeley in 1883, and then Norman McGregor on 3 January 1885. The family returned to London in 1891, when Norman was 6.

Charles (Sr.) had a successful period in Berlin. On his return, he is credited to have written important biographies on Alexander III of Russia, and on King Edward VII, being the story of his life as Prince of Wales.

The family was to found living at 17 Priory Road (now Avenue), Bedford Park at the date of the 1901 Census. In the household were the parents, together with only the 17-year-old Charles Edward. The 19-year-old Blanche Mary was no longer with the family, and Norman, at 16, was boarding at Cranleigh School, in Surrey.

By 1911, Charles (Sr) lived, at age 62 alone, with a housekeeper, at 4 Oxford Road Chiswick. His wife Blanche lived at Harvard Court in West Hampstead. Charles Edward, and Norman, now both Stock Exchange clerks, had jointly taken a house in Esher, where they took in boarders.

In the years before the outbreak of the Great War, as a Germanophile, Charles had been very active in opposing anti-German feeling in the English press – inveighing against reports of alleged German spying and war plotting. In the “Contemporary Review” he criticized inter alia “The Riddle of the Sands”, Erskine Childers’ Spy thriller: “Unscrupulous spy-sensations of our Yellow Press constitute acts of criminal levity against the peace of two kindred nations-a poisoning of the wells of public truth-and that, too, at a time when each country is only too ready to believe the worst of the other”. How poignant and ironic that he should subsequently lose his youngest son in the War when it came.

Norman McGregor Lowe, by 1911, as we have seen, was a Clerk at the Stock Exchange. The Cranleigh School Roll of Honour notes that he was at the school from the third quarter of 1901 until 1903, when he had attained the age of 18. But it seems that before 1901, he had attended Latymer Upper, whose Roll of Honour unfortunately states that the “no time or achievements while a pupil remain, as no entry for him survives in either the Admissions Register or the Applications Register”. However, his enlistment in the 14th Battalion, County of London Regiment is recorded in the October 1914 School Magazine. He seems to have moved from Latymer to Cranleigh for his more senior education.

His subsequent time between 1903 and 1914 will have been predominantly centred on London. We know that he was a keen athlete, and like many of his contemporaries, like his Latymer friend, Richard Yorke, he will have enlisted in one of the many Army Territorial Units that existed in London. These, such as the London Scottish and the Artists Rifles, functioned much as a social club for the men who volunteered. Norman joined the ranks of the Territorials in 1906, joining the 7th Middlesex Volunteer Rifle Corps. This became the 14th Battalion County of London Regiment, (the London Scottish) in 1908, the date of his formal attestation. Although there was military training, (a fortnight’s annual camp counted in the records as active army service) most of the regular meetings involved sporting pursuits, or evening activities. In athletics, Norman was a member of the many successful Marathon teams put into the field by the Battalion.

The Territorial Battalions were enlisted for service in the British Expeditionary Force by Kitchener almost immediately the War was declared, the K1 Force. Norman’s Service Record confirms that he consented to foreign service for the Emergency on 12 September 1914 and at that stage he was a Lance Sergeant, having been promoted Corporal in 1912, and raised again in April of 1914. He was promoted to full Sergeant from 2 November 1914.

The Battalion travelled to France on 15 September on SS Winefredian. They were allocated to the 1st Brigade in the 1st Division, and within six weeks found themselves under the orders of Gen. Gough at St Eloi, and moved forward to Wytschaaet on 31 October and prepared to mount a counterattack against the enemy at Messines. This proved impossible under very heavy fire and the Battalion took large numbers of casualties, 175 killed or missing, before retiring to Wulverghem. It had been a baptism of fire. The C.O. commented that the men had “behaved very steadily”. It was this action that earned Norman his promotion to Sergeant.

The Battalion was soon back in action: six weeks later at Givenchy les la Bassee, East of Bethune, at the Southern end of the British Front line, which extended from Ypres to Cuinchy.

With the French under heavy pressure at Arras the order was given that the British force would provide relief by attacking the Germans around Givenchy, thus preventing German reinforcement of Arras from that quarter at least. On 19 December Indian troops from the Lahore division launched an attack from the village and successfully capturing two lines of German trenches in front of La Bassee.  However a prompt and aggressive counter-action pushed the Indian troops back out again, and the following day a further heavy attack was launched by the now reinforced Germans.  Defensive tactics were severely hampered by the heavily waterlogged conditions of the Indian trenches. Consequently the German force broke through and managed to occupy part of Givenchy until the two British reserve Battalions including the London Scottish (rushed into position for the purpose), were brought into action, with the result that the village was back in British hands by the close of 20 December. Eventually, the line was restored to its original position
By the end of 21st. December.

It was during this action that Norman’s friend Richard Yorke was killed, as described in the St Michael’s Parish magazine of February 1916, at the time of Norman’s death. Norman’s own actions at Givenchy, and his conduct at Messines were to lead to the award of the Distinguished Conduct Medal in 1915.

“For conspicuous gallantry and marked ability, and resource consistently shown throughout the campaign, when he constantly acted as a scout in front of the entrenchments often under a heavy fire from snipers and machine guns. He supplied sketches and much invaluable information connection with the enemy’s trenches and wire entanglements.”

Thus Sergeant McGregor Lowe’s D.C.M. was the reward – not of one, but of a succession of meritorious actions. Yet perhaps the most conspicuous and determining of these was a scouting feat performed by him at Givenchy, near La Bassee in January 1915, which was thus described by a comrade:

“In between the opposing lines of German ad British trenches-that is, in ‘no man’s land’-stood a little cottage or farm building. From it a trench ran back to the Huns, who could thus approach it under cover and unobserved. More over, it obscured our view of the enemy trenches. It was further suspected that the enemy was making use of the shelter provided by the house both as a sniper’s post and an advanced point from which to hurl bombs and grenades at night. A further danger was its suitability as a convenient starting point for hostile mining. It was therefore decided to blow it up, its proximity to our own lines not rendering it an ideal target for our guns. Volunteers were asked for to undertake a preliminary reconnaissance, and in due course a plan of action was devised. A sunken track led from our lines to the little cottage, and our kilted hero crept and crawled long it, followed at short intervals by two other trusty scouts. They’re every motion and step was watched with breathless interest by the men in out front line as he gradually drew nearer to his object-almost one hundred yards away. Would a volley of bullets receive him? Were the house and the track occupied by day as well as by night? Each one asked him. Meantime sergeant Lowe had reached the immediate precints of the house which he had approached as stealthily as a cat, and found his path encumbered by dead Germans, Indians and British; for this very spot had been the centre of some fierce hand to hand fighting prior to our settling into the trenches we then occupied.

“The stench, as he afterwards remarked, was almost overpowering, but in another minute he had satisfied himself- first by listening and then by close inspection-that the house was clear of the enemy, and then crept a few yards on to the head of the communication trench which ran along the side of the house into the Germans lines. His revolver was ready cocked in the event of this revealing the presence of an enemy, but he was relieved to find none, though the trench bore evidence of recent occupation. He rapidly signalled back to his comrades that the coast was clear, and then remained at this point while the Engineer officer in charge of the explosion arrangements crept up with his wires and laid them in the house. This done the party retired, Sergeant Lowe bringing up the rear. After this the firework display was given, and the astonished Huns had the mortification of seeing that friendly cottage, not a hundred yards away, blown up in broad daylight before their very eyes as if by magic! It is incidents such as these, which do so much to demoralize the enemy, because he credits you with all the initiative and enterprise.

“On a subsequent occasion of a similar kind he was to fall a victim to his over daring at Vermelles, where he was laid to rest in circumstances of exceptional honour and distinction, his funeral having been attended by his Divisional General and Brigade staff, which four of his own pipers gratified what had ever been the wish of his heart, should he fall on the field of honour, to be laid to his last rest to the requiem strains of ‘The Flowers of the Forest’-the most mournful and touching of all our battle lamentations. This graveside incident, better than the formal language of an official record, conveys a vivid suggestion of the further services rendered to his Brigade subsequent to his reception of the D.C.M. and his elevation to commissioned rank.”
(Extracted from ‘Deeds That thrill The Empire’)

The War Diary fails to mention Norman’s commission, from within the Regiment’s ranks, that was officially recorded in the London Gazette supplement dated 1 September 1915, with effect from 21 August.
Nor does the Diary amplify the circumstances of Norman’s death, de Rufigny has the following account:
“Shortly after the commission was granted, he was appointed Scout Officer to the 1st Brigade, and whilst acting in that capacity was killed in action by the bullet of a German sniper at Vermelles, near Bethune, France, 10 Jan. 1916. Buried there. Colonel B. C. Green, London Scottish, wrote to his father: “Norman was one of the few old members of the corps remaining, and personally I feel his death more than I can say. He was a very gallant officer, and his loss will be deeply felt by the Battalion and the Brigade. His funeral took place amid the roar of guns, and was a most impressive ceremony”.

Norman was unmarried, and his elder brother, Charles Edward Berkeley was his executor.
(Charles survived the Great War, having already also joined the London Scottish as a private and later commissioned into 3 Company, N. Scottish RGA. When in second in command of his battery in June 1918, he was awarded MC, and gained in the following September, the DSO after action at Roussoy and at Le Cateau.)

Norman is also remembered on the Stock Exchange Memorial.