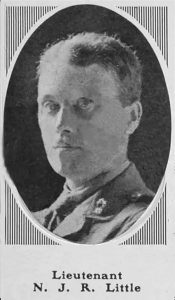 Norman James Richard Little was born on 13 September 1883 in Plumstead, within the  Royal Borough of Greenwich, Kent.  His father was James Little, born about 1853 in Woolwich and his mother was Mary, born 1855.  At the 1891 census, when Norman was 7, the family lived at 7 Elmwood Terrace, Plumstead.  James worked as a senior bank clerk.  The couple had an elder son, Geoffrey.  By 1901, they had moved to “White Heather”, Graham Road, Mitcham in Surrey, but sadly James was now a widower.  He had advanced to Deputy Bank Manager.  Geoffrey, at 21, was an Oxford undergraduate, and Norman, at 17, was an art student.

Norman had been educated at the City of London School, and studied at the Royal Academy Schools.  For a brief period from 1901 to 1903 he had volunteered and joined the Honourable Artillery Company as a Territorial and infantryman.  On 12 July 1910, at St Peter’s Church Cranley Gardens, he married Beatrice Winifred Paddon.  By 1911, he was an established artist and illustrator, and the couple had moved to 6 Queen Anne’s Grove, Bedford Park.  In 1912, their son John Geoffrey was born.

Norman volunteered for war service in early 1915, attesting on  22 April , when he was entered as a Private in the Inns of Court OTC.  It appears from his service record that he and Winifred at that time was living at 86 Sinclair Road, West Kensington, so his residence in Bedford Park was  for a fairly short period. In the OTC he was appointed Lance Corporal in late June 1915, but by 8 July had been commissioned as Second Lieutenant in the 15th Battalion, Royal Fusiliers.  He undertook a period of training in Ipswich with 2/8th London Regiment.  It is not clear when he first undertook active service in France.  It appears that after training he will have transferred to 11th Battalion, Royal Fusiliers.

The 11/Royal Fusiliers was formed at Hounslow as part of the Second New Army (K2), and joined the 54th Brigade of the 18th Division, moved to Colchester and then in May 1915 moved to Salisbury Plain.  In July 1915 the Battalion mobilised for war and landed in France at Boulogne and the Division was engaged in various actions on the Western front.  Unfortunately the Medal Card omits the date of Norman’s first entry to a war theatre, but one must assume he did not see action until 1916.

During 1916 the unit was involved in the Battle of Albert, the Battle of Bazentin Ridge, the Battle of Delville Wood, the Battle of Thiepval Ridge, the Battle of the Ancre Heights, the capture of Regina Trench, and the Battle of the Ancre.  Thus Norman would certainly have been present at the storming of Thiepval and the Schwaben Redoubt in September and served during the winter of 1916/17.  He came through the assault on the Miraumont  in February 1917 unscathed, during the Ancre Operations, which led on to the controlled enemy retreat to the Hindenburg line during March, and occupation of their trench areas by the advancing Allies.  On 13/14 March, the 54th Brigade relieved the 53rd Brigade that had captured Irles, and ‘B’ Company of 11/Royal Fusiliers took over a front-line position on the left flank facing Achiet-le-Petit, a village still occupied by the Germans.  They were followed by the remainder of the Battalion overnight.  They then deployed a line of outposts lining forward slopes facing north-west towards the village, thus protecting the Brigade’s open flank, comprising troops of 7/Bedfordshire and 6/Northampton Battalions, (see the trench map attached), on its right.  It was during this relief that it seems Lieut. Norman Little was killed, in one of the outposts, in the course of occupying the Loupart Line, that had just been evacuated by the enemy’s retreat.  The Battalion remained in the front line until relieved on 20 March.  The War Diary entry for that day records that confirms that he and 7 Other ranks were killed during the tour of front-line duty.

Norman Little’s body was never recovered, though a map reference for his field burial appears in his Service Records at the National Archives.  His name is commemorated at the great Thiepval Memorial in the Somme, at the Royal Academy’s Memorial.  In about 1930 his widow Beatrice Winifred Little received his medals, the British War and Victory medals together with an Oak Leaf Emblem denoting a “mention in dispatches”.  She died in Chatham in 1957, leaving her estate to her son Captain John Geoffrey Little, RN.  She never re-married.