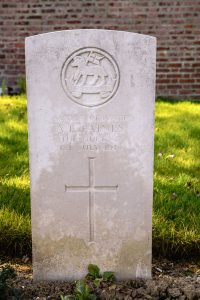 At the date of the 1901 Census, Alfred was aged 6, having been born in Hammersmith in 1885, and was living with his parents, Joseph Henry and Martha Paines at 38 Berrymeade Road, South Acton.  Joseph was a stonemason, aged 45.  The couple had 5 children: the eldest, also called Martha, was born in 1880 and had married, but was living with her parents, together with her husband, Charles Jenkins, a horticultural worker, and her two young children, Maggie ,4, and Ethel Laura, 1.  Alfred had two other sisters at home: Florence Edith, 14 and Isabella, 9, and an elder brother, Philip Alfred, aged 12.  In 1891, the family had lived in Hammersmith, at that time with another child, Henry Robert, born 1882.

Ten years later, 1911, the family had moved to Chiswick, and lived at 22 Holly Road.  Philip, at age 21 was working as a fishmonger, Isabella and young Maggie were working at the local soap factory, Ethel Laura was at school, as was another young brother, Tom, age 7.  Alfred worked as a shop errand boy, now aged 15.  The census return states that Maggie, and Ethel Laura now bore the surname Paines.  Of Charles and Martha Jenkins there was no trace.

Alfred volunteered in the early months of the War, and joined the 7th Battalion, The Queen’s Own South West Surrey Regiment as Private No. 5593.  The 7th (Service) Battalion was in the first tranche of Kitchener volunteers, and was formed at Guildford in September 1914.  It came under command of 55th Brigade, 18th (Eastern) Division.  It served in France from 1915.  Alfred’s Medal Card confirms that he first was on active service overseas from September of that year, so he qualified for the 1915 Star.

Almost immediately the 18th Division was positioned on the Somme Front, based at the Southern end , near Neuville de Corbie, and Bray at the confluence of the Ancre and Somme rivers.  For the next eight months the Brigade was on routine trench duties, subjected to continuous low-intensity bombardment from enemy positions without any specific major engagements.  The Battalion’s first major involvement would be the first day of the Great Somme Offensive, 1 July 1916.

It is not known when Alfred would have sustained his fatal injuries.  Despite its success, the action was very costly.  He is buried at Combles Communal Cemetery Extension but his original burial would have been much closer to the site of the battle.  Concentration of graves after the war was extensive. Alfred’s body was not exhumed from his first resting place, a multiple grave containing five compatriots until 1933. The Grave Registration document demonstrates vividly the intensity of the first day of the battle of the Somme.  At least eleven of the sixteen graves listed relate to Alfred’s Battalion compatriots, some of whom remain unidentified.

Alfred’s mother, Martha, died in 1922 at the age of 59, so she would have been aware that her son was missing, believed killed, but would never have had the consolation of knowing he had been positively identified, nor known the site of his last resting place.  Her second son, Philip Alfred, the fishmonger, volunteered at the end of 1915.  He joined the 124th Company of the Machine Gun Corps.  He likewise was killed at the Somme, on 8 October 1916 – his body was never found – he is commemorated on the great Thiepval Memorial for those of no known grave.

We do not know why Philip’s name was not submitted for inclusion on St Michael’s Parish memorial.