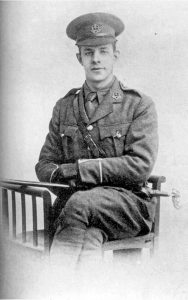 Albert Alexander Robinson was born on 12th September 1894 and spent his early years in Burma where his father worked for the Indian Imperial Police. On returning to the UK the family lived firstly in Wavendon Avenue and later in Esmond Gardens, South Parade, Chiswick. Alexander attended Colet Court and then St Paul’s School where he was a member of the Officer Training Corps (OTC) from 1909 to 1912. He won an Entrance Scholarship to University College, London where he studied Chemistry and Physics, obtaining excellent grades in his first 2 years of examinations. He made a special study of explosives, a portentous choice as it turned out for his subsequent military service. Although he was unable to complete his studies because the war intervened, he was awarded a BSc (War) degree in 1916.

Whilst at University, he joined the Ealing (Middlesex Regiment) Cadet Corps in whose uniform he is photographed here. He volunteered for active service in November 1914 and was gazetted a Second Lieutenant in the Royal Garrison Artillery. He went to the front in France in August 1915, seeing action at the Battle of Loos. He was attached to the 59th Siege Battery, working with 6inch Howitzer guns providing heavy artillery support to front line infantry. It was whilst serving on the Somme in the July offensive of 1916 that he met his death. Alexander was killed near Mametz on 20th July by a fragment of shell, probably while acting as a Forward Observation Officer (vide his commanding officer’s letter) whose job it would have been to report back to his battery from an exposed forward position on the range and trajectory of their guns. He was just 21 years of age and had been promoted to the rank of Lieutenant just a few weeks before he died but sadly never learned of his promotion.

His father, William, was Churchwarden at St Michael’s and before the war Alexander had been a regular member of the altar serving team. In the Parish Magazine of July 1916, the Rev. Cartmel Robinson commented movingly:

‘….comes the sad news from France of the death of Alexander Robinson, the only son of our Churchwarden. He was one of the most regular and devout Servers at the altar, and had a promising career in front of him, having done well at University and taken a good degree in Science, though so young.’

Adding to his father’s distress on receipt of the standard telegraph from the War Office (see copy) notifying him of his son’s death, was the error in his name. Instead of addressing him as Mr Robinson it referred to him as ‘Mr Alexander’ – his son’s Christian name. It took Mr Robinson several letters to get this corrected.

Alexander Robinson’s name lives on at St Michael’s, commemorated in the Bishop’s chair given by his father – ‘my only son; memory holds him ever’. In October 1917 the Parish magazine reported ‘it stands (as it still does today) where Lieut. Robinson used so often to have his place among the Servers before he went out to the War…it is a fitting memorial to a good son, a good soldier, and a good Christian’

Just a few days before the 120th anniversary of his birth, St Michael’s current Master of Ceremonies, Cathie James, placed a cross of remembrance at his grave in Dantzig Alley Cemetery on behalf of all the altar servers both past and present.