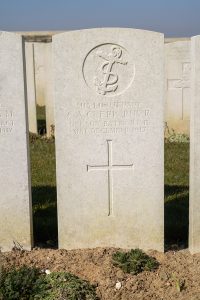 Cecil Alexander was born in Bangalore, Madras on 2 November 1888 and was baptised the following day.  His parents were  Francis Bingham Clerk, born in Bangalore in 1843, and Alice Minnie Clerk née Fleischer , born in Constantinople in 1858, a British subject.  He was the youngest of six children: Gertrude Isabella and Beatrice Alice were twins, born in 1877.  There were two elder brothers: Frederick Vivian, (1879) and Thomas Michael (1880) and then Marguerite Eva (1882) who sadly died in 1885.  All were born in Bangalore.

It is not known when the family returned to England, but it presumably would be after the death of Cecil’s father, Francis.  Certainly, in 1911 Cecil’s mother, Mrs. A.M. Clerk was a widow, boarding at  12 Western Parade, Southsea.  Later, she lived at 59 Glenmore Rd., Belsize Park, Hampstead, London NW, and then 23 South Hill Park Gardens, Hampstead, London NW.

We have no address for any of the family within the Parish of Bedford Park.  In the 1901 census, Cecil, at age 12, was a boarder at the High School, (now the old Grammar School), Lewes, in Sussex.  We know that in 1907, at 18, he indented for four years as an apprentice with Bucknall Steamship Lines Ltd, expiring in 1911.  In 1908 he is listed as having arrived at Sydney from Port Pirie aboard SS Kazembe in that capacity.   He continued in the Merchant Navy, gaining his Board of Trade’s Second Mate’s Certificate for Foreign-going Steamships in 1913.

It isn’t clear whether he remained ashore until the Declaration of War in August 1914.  We do know, however, that he joined the Inns of Court Officers Training Corps, becoming a Lance-Corporal before transferring to the Royal Naval voluntary Reserve as a Sub-Lieutenant on 11 February 1916.  After prolonged training at Larkhill and Blandford Camps, he was transferred to the 3rd. Reserve Battalion in September 1916 and finally joined Nelson Battalion, Royal Naval Division, at Le Champneuf, a coastal village near Le Crotoy in the Bay of the Somme on 14 December 1916 as a reinforcement of Officers following a bad mauling of the Battalion at Beaucourt sur l’Aisne in mid November.   A year of intermittent front-line tours followed, but it seems from his Service Record that he did benefit from a week’s leave in England  in July 1917.  He then applied to be transferred for Sea Service, but this was declined, and he re-joined the Battalion in September.

In December 1917 the Battalion was occupying the front-line trenches facing the Hindenburg Line at Etricourt, near Havrincourt Wood, and by the 28th was occupying trenches on “Highland Ridge” (see Map).

The  Battalion War Diary describes the operations on 30th December:

“A heavy enemy barrage was laid apparently on the whole of the Divisional Front.  Orders received to reinforce DRAKES with one Coy.  The enemy  had penetrated our front line system of trenches but for the time being was held up by the DRAKES.

2.15 p.m. In accordance with orders from O C DRAKES, “C” Coy. Nelson counter attacked from WELSH SUPPORT R.15.a.85.70 to R.9.b.46.00 from NAVAL R over the top – No artillery barrage.  A few men succeeded in gaining objective, but the right was held up by machine gun fire.  At the same time a bombing party bombed up FARM AVENUE at R.15.a.6.9 towards the right end of WELSH SUPPORT, meeting considerable opposition.  SPLENDID GALLANTRY was shown by SUB LIEUT. CLERK, O.C. “C” Coy who, although severely wounded did not relinquish his command until forced to do so through weakness and loss of blood.  Petty Officer J C WINN who was in charge of the bombing party also showed splendid gallantry during the attack.

4.30 p.m….. ‘A’ Coy on the right supported by ‘D’ Coy attacked from NAVAL RESERVE.  ‘B’ Coy in cooperation with the DRAKES on the left attacked on the immediate left.  The attack was entirely successful, WELSH SUPPORT  re-occupied and by 5.30 p.m. after a bombing on the right we were in touch with one of the companies of Anson Battalion (188th Bde.) who had taken part in the attack”.

Cecil Clerk, with severe wounds to the spine and back, was treated at 48th Casualty Clearing Station at Ytres but died of his injury on 31 December 1917, aged 29.  He was buried at Roccquigny-Equancourt Road British Cemetery, Manancourt, Plot 7.D.25.