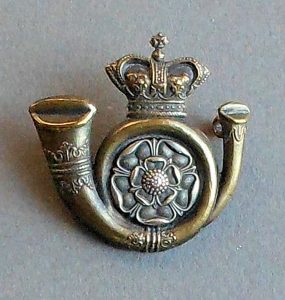 George was the second of the three sons of Henry Hall and his wife, Annie.  In 1901 the family lived at 20 Duke Street, Chiswick, at the Western border of the Glebe estate in the parish of St Mary Magdalene Church, (destroyed in the Second World War).

Henry was aged 38, and stated to be a Paper Stainer.  Annie was 36. The eldest child was Harriett (16), who had commenced work as a bookbinder.  Harry, the eldest son was aged 10 and George was 9.  The youngest was Albert, (7).  The parents had started life in Clerkenwell and Islington.  All the boys had been born in Barnsbury, an area within the Islington borough.  By 1911, George’s mother had sadly died, though not before giving birth to her fifth child, Charlie in 1895.  The 1911 census confirms that the family had moved to 75 Glebe Street.  Henry was now a Block Printer at the local wallpaper manufacturers, and George, 19,  was apprenticed in the same profession.  Harriett, now called Annie, was 27 and unmarried, and looking after the household.  Harry had left home.

George will have volunteered soon after war had been declared.  He started as a Private, 14200, joining the 8th (Service) Battalion KOYLI which was formed in September 1914 at Pontefract as part of the Third New Army (K3), moved to Frensham to join the 70th Brigade of the 23rd Division and then moved to Aldershot.  Final training took place at Bordon.  Before his overseas active service commenced, George (now aged 23) married Ellen Cecilia Young (21), a factory hand, on 3 July 1915 at St. Augustine’s Church, Fulham

Within a month of his wedding, the unit mobilised for war and landed in France on 26 August 1915 when the 70th Brigade transferred to the 8th Division which engaged in various actions on the Western front including: The Battle of Albert.  On 1 July 1916, the first day of the Somme campaign, the Brigade was at the Ovillers spur.  Attacking from in front of Authille Wood, good progress was made quickly by the leading waves and the German front line trench was entered.  But the following waves came under heavy MG fire from both flanks, losing 50% crossing No Man’s Land.  There was close quarter fighting in the German second and third lines before the battalion retired to the British line during the afternoon, all officers having become casualties.

At the end of July 1916, it transferred back to the 70th Brigade of the 23rd Division. The Battalion was moved to the Armentieres sector, and in October was in action at Flers Trench, sustaining high casualties from shelling before the attack commenced, though two Companies occupied two enemy trenches after hand-to-hand fighting and consolidated a new Line.

In 1917, the 70th Brigade was involved in the Battle of Messines.  They were in the area of Hill 60 from 10th May and taking part in preparations for the attack on Messines Ridge. The Germans assaulted the line on the 13th May and resulted in successful counter-raiding by the 70th brigade.  Then the 8th Battalion took part in the attack on Messines Ridge on the 7th June 1917, on the Brigade’s left flank and would have witnessed the large mine explosions at the start of the battle. These explosions rank among the largest non-nuclear explosions of all time. The mines exploding at Hill 60 and Caterpillar Hill near by signalled the start of the attack. The battalions objective was the German trench called Image Trench and part of Illusive Trench, these being the German frontline. The objectives were captured 3hours 40 mins after zero hour and  consolidated under the cover of Lewis guns. The 8th Battalion remained in the front until 10th June. Corporal George Hall was lost on the first day.  His body was never recovered.  He is commemorated on the great Menin Gate at Ypres on Panel 47.

His widow Ellen Cecilia would have received George’s medals:  1915 Star, and War and Victory medals at her post-war address, 29 Mawson Lane Chiswick.  The couple had no children.  It is not known whether Ellen ever re-married.  George’s elder brother Henry George HALL died after becoming a Prisoner ofWar at the end of 1918.