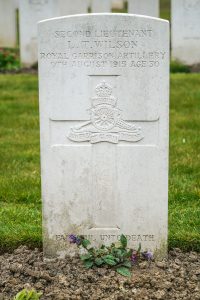 Laurence Wilson was the fourth son of the first vicar of St Michael and All Angels Church, and his wife Fanny nee Cobbe.  The eldest, Charles Wilson  became a general medical practitioner in Petworth, before in 1916 joining the Royal Army Medical Corps and losing his life in action in France in 1918.  The second son, Harold Cobbe Wilson had been killed in the Boer War at Spion Kop in 1901.  Alan Campbell Wilson became a solicitor, and in 1911 aged 29 was working with Messr. Mellor & Co.  He served in the RASC and survived the war.  The youngest son, Edward William Gravatt Wilson served with distinction in the first war, gaining an MC, and became a career soldier, serving also in WW2, being mentioned in despatches in the 1942 Desert Campaign, rising to the rank of Brigadier before his death in 1971.

Like all his brothers, Laurence attended Charterhouse School.  He trained as an engineer: first being employed on extensions to the Central London Railway, the new London low-level sewer and the London Electric Railways Company, before becoming a Resident Engineer for Sir Alexander Binnie, Son and Deacon with the Wirral section of the major Alwen to Birkenhead aqueduct project, completed only in 1921.

Laurence was commissioned 2nd. Lieutenant in the Royal Garrison Artillery in December 1914.   Presumably because of his civil engineering experience, he was attached to the Royal Engineers 171st Tunneling Company.  This was one of the first tunneling units formed in February 1915 and in March it was involved with the mining in the area of Hill 60 near Ypres.  It moved to Ploegsteert in July 1915 and commenced tunneling in the St Yves area – operations that only bore fruit with the Battles of Messines Ridge in 1917.  We do not know how Laurence became wounded, but it is clear that he had been treated at a first line centre about 8 Km. away in Armentieres, where he died of his wounds on 9 August 1915.  It was common for underground skirmishes to take place when opposing tunnels  broke into each other.

After his retirement from St Michael and All Angels, Alfred Wilson and his family had moved to Kensington, and he had died in 1909.  Laurence’s mother remained there until her death in 1925.  Both her sons are commemorated at St Stephen’s Church, Gloucester Road as well as at St Michael’s.  They also appear on the Roll of Honour at Charterhouse School whose memorial chapel records no less than 670 First War dead, as many as were attending the school at any one time.