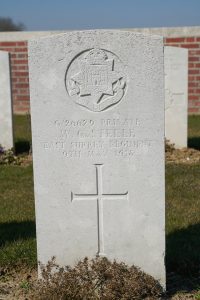 William Charles Steele was born in Chiswick on 15 June 1899 and baptised on 16 July the same year, probably at St Nicholas Church.  His parents were William Steele, a Carpenter and Joiner working for a local brewery, presumably Fuller’s and Kate Priscilla who in 1901 were living at 11 Sutherland Road, Chiswick, close to Chiswick House Grounds.  William Charles had an elder sister, Florence Maud Caroline, born in 1897.  The couple had a lodger, Joseph Ramsay, a 20 year old Mechanical Engineer.  By 1911 the family had moved to 24 Elliott Road in the parish of St Michael and all Angels.  By then, there had been born a further daughter, Minnie Kathleen, in 1905.  William Charles was a schoolboy aged 11.  The parents still took in lodgers. At the Census, they were hosts to a baker’s assistant and a grocer’s assistant.

William Charles will have joined the St. Michael’s Cadets when war was declared.  When he became 18 in June 1917, he will have been conscripted, and attested at Hounslow, joining the East Surrey Regiment as Private 26629.  He then he would have undergone intensive training in a Provisional Battalion, and when proficient, will have sent to a Reserve Battalion.  By the end of 1917, because of manpower shortages, the government reduced the lowest age for overseas service from 19 to 18 and a half.  He was finally attached to the The Queen’s (1/22 County of London) Regiment as Private 84153.

This Battalion in 1918 was in action at the Battle of St Quentin, at the start of the last great German Spring Offensive, Operation Michael, including the First Battle of Bapaume, and the Battle of the Ancre.  Unfortunately, Private Steele’s Service Record has not survived, so it is not possible to determine whether he was certainly present in the Battalion at that time.  The Medal Card gives no indication of the date of his re-allocation to the East Surrey Regiment, nor to which Battalion of that regiment – it may have been after the Spring Offensive, when all the units of the 5th Army was decimated and later reconstituted.  The 1st. Battalion East Surreys was also certainly in France in the Somme area from April 1918, but earlier.  However, the place where William died was in the trench sector occupied by the 22/Londons.

Private William Charles Steele was Killed in Action on 9 May 1918, just a month before his 19th birthday.  He is buried at Bouzincourt Ridge Cemetery near Albert in Plot II.R.17.  The cemetery was created In the first week of September 1918.  Plot I was made by the V Corps Burial Officer, who cleared the battlefields and the remaining Plots were formed after the Armistice when 500 graves were brought in from the immediate neighbourhood.  Such graves originally were made in smaller or isolated cemeteries, but, at a later date, were exhumed and reburied in larger war cemeteries. The concentration of cemeteries allowed otherwise unmaintainable graves to be moved  where the War Graves Commission could ensure proper commemoration.  When found, in March 1919, he had been buried at Map Reference W.19.b.5.5 (see trench map below) together with another 23/London Private, killed on the same day, in trenches at the end of the Michael Offensive.  It is likely that they were killed by enemy shell or machine gun fire.

William and Kate Steele will have received William’s  British War and Victory medals after the War.  He is commemorated on both the Parish and the Cadet memorials in St. Michaels.