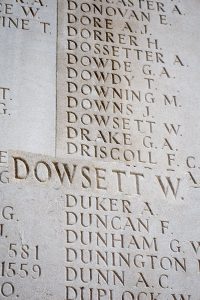 William came from a large family, long established in Chiswick.

Thomas Morrice DOWSETT, originally from Chelmsford in Essex, was recorded as a Groomsman, living at 61 Swanscombe Road, Chiswick in 1891.  He had married Phoebe Marsham at St Peter’s Church Hammersmith in 1885.  By 1901 they had moved to Chiswick New Town, where at 14 Garrick Grove (later Hogarth Avenue) there were 8 children: Sarah (15) a packer at the local soap works, Lydia (12), Jennie (10), Georgina (2), Emily (aged 11 months), together with the eldest son, Walter (born 1987), Thomas (8), and the youngest boy, William.  Another daughter, Phoebe, was born in 1904.

By 1911, William’s father had died, and the family had moved again, and lived at 68 Dale Street, in the Glebe Estate.  By then, William’s mother Phoebe  was working as a laundress and ironer, and both Lydia and Jennie worked at a laundry.  Walter had married in 1908 and lived in Shepherd’s Bush, with three young children, Phoebe, Lydia and May.  William was working as a fishmonger’s assistant, aged 16.

There is no record of at what stage in the war William had volunteered for service.  He became a Private in the 1st Battalion, Middlesex Regiment, which was a Regular rather than a Territorial unit.  His Medal Card does not state the date when he entered active service, but he was not awarded a 1914 or 1915 Star, so he probably volunteered in late 1915 or early 1916.

William is recorded as being Killed in Action on 21 July 1916.  The Battalion’s War Diary indicates that the unit was in the 33rd. Division, 98th Brigade.  In June 1916 it was in a quiet sector near Bethune, but It moved via Corbie in the Somme to Dernicourt, and then to positions at the South edge of Mametz Wood by 14th July.

The battle of Bazentin Ridge was the start of the second phase of the Battle of the Somme. The first phase (the battle of Albert, 1-13 July 1916), had seen the British comprehensively fail to achieve their targets for the attack, but they had made some progress, eventually reaching the German second line, on Bazentin Ridge.

The attack was made by the Fourth Army (Rawlinson). He devised a plan for an attack at dawn, a rarity during Douglas Haig’s time as commander in chief, as he did not believe that it was possible for the inexperience troops of the New Army to carry out the complex manoeuvres required in advance of a dawn attack. General Rawlinson persisted with his plan, which required XIII corps to advance up to half a mile into no-mans-land on the night of 13/14 July. This was necessary because no-mans-land was particularly wide at this part of the line. XV corps, on the left of the line, didn’t have to make such a dramatic advance, although its right hand division did have to move forward during the night.

The attack was preceded by an artillery bombardment which began on 11 July. The attack itself began at 3.25am, after a five minute bombardment. The short bombardment and the unexpected dawn attack caught the Germans by surprise, and along most of the line the initial attack was successful.

From right to left, the 9th Division successfully captured most of the village of Longueval, but was unable to clear the Germans out of the northern part of the village. To their left the 8th Brigade of the 3rd Division was briefly help up by uncut wire, but was able to advance after the German position was outflanked. The 9th Brigade captured Bazentin le Grand despite encountering machinegun fire. Next in line the 7th Division attack captured the German front line at 3.25 a.m., mostly because it had been effectively destroyed by the artillery, and then captured Bazentin le Grand Wood. During this period a number of Germans were seen retreating towards High Wood, on the next defensive line (the Switch) but were killed before they could reach it. By 7.30 am the division had captured Bazentin le Petit. Finally, on the left the 21st Division captured Bazentin le Petit wood and helped clear the village. The initial attack had captured the German second position along a 6,000 yard front.

By 10 a.m. there was no German resistance around High Wood – several British officers advanced towards the wood without coming under fire. Major-General Watts, commander of the 7th Division, wanted to advance into the woods, a move that may well have broken the Switch line before it was fully formed. Instead, he was ordered to wait for the cavalry to come forward, as had originally been planned.

The cavalry did not arrive until the evening, and the attack did not begin until 7 p.m. The cavalry reached the woods, but had trouble advancing through the trees. They were able to capture the southern part of the woods, but the Germans held on to a line at the northern edge of the wood. That night the German high command rushed its reserves to the area, and the best chance for a breakthrough was gone.

The relative ease with which the British captured their objectives on 14 July was not reflected in the casualty figures for the day – 9,194 casualties were suffered on the day.

On 15 July the fighting developed into two separate battles. The fighting on the right became designated as the battle of Delville Wood (15 July-3 September), while the battle of Bazentine Ridge continued for another three days. The last serious British offensive came on 15 July, when the 91st brigade replaced the cavalry in High Wood, and made a determined but unsuccessful attempt to clear the woods. That evening the brigade was ordered to retreat back to Bazentin le Grand. Further attacks were hampered by a German counter-bombardment, which filled the old no-mans-land with poisoned gas, making it difficult and dangerous to move to the new front line. High Wood would remain a British target for the next two months, through the battle of Pozieres Ridge (23 July-3 September 1916).

William’s Brigade was brought in as reinforcement, well after the initial offensive, once it appeared that the village of Baentin-le-Petit had been secured.

“Everywhere around us showed signs of a terrific bombardment.  We turned about here and bivouacked on the W lip of valley just N of Fricourt.

“15 July: Left about 6.30 am for Bazentin-le-Petit village passing on our way through a gas cloud which made us all feel most uncomfortable.  On reaching the village church, B and C Companies proceeded round the North side of the village, A and D going straight through the village.  Arriving at the road running N and S past the Eastern end of the village the Companies deployed: B and D in the front line, C and A in support on a front of 800 yards.  The 1st. Queen’s (100th Bde.) attacked on our Right, and the  2nd Welch Regt. (1st Division) on our Left.  We had the 1/4 Suffolks in support, with the 2/ Argyll’s and the 4/ King’s in reserve.  The first objective was the German Switch trench.  On deploying werealong the road we found a party of the enemy in the N corner Bazentin-le-Petit Wood who fired into our left flank with machine guns and rifles  and pointed out our position to their artillery by firing white and red flares over us.  We also came under heavy field gun fire from the S principally High Wood , which, we had been informed was in our hands.  Companies both thus advanced with both flanks open, and were held up on the crest of a slight ridge e of the village by heavy fire.  We tried to dig ourselves in but eventually compelled to fall back to the line along the road running N and S on the E side of the village.  The 1/4 Suffolks fared no better than we and the 100th Bde. on our R were likewise unfortunate.

Every effort was made to reorganise as far as possible.  One Company of 2/Argylls was brought up to strengthen our Left from opposite which the party of the enemy had not been dislodged.  The Battalion remained in this position, heavily shelled, until 10 pm when we were relieved by 4/King’s and the remaining Companies of 2/Argyll’s.  We returned to bivouac in the valley NE of Mamatz Wood.

“17 July:  Heavily shelled from 9.30 am until 4.30 pm.  The order was given to scatter and we sustained very few casualties. A certain amount of kit was buried .  The Battn. assembled at about 6 pm  and at 8.30 pm we moved into the line again taking over Bazentin-le-Petit Wood.

“18 July:  Batt. HQ was in a deep German dugout which took us 2 days to clean up.  The dispositions in the line wa A B D C companies from R to L, the line being on the outside of the wood  from the railway to the SW corner.  Heavily shelled all day .  We were principally occupied with digging in and reorganising.  Organised a thorough search of the wood which produced a german officer in a deep telephone dugout, that was furnished with an O.P. on top, a fine  telephone exchange and plenty to eat and drink.  he officer had evidently been observing for the enemy’s artillery.

“19 July: Brig.Gnl. Carleton came up to see us.  2?Lt Calder ws killed while talking to him at the entrance to Bttn. HQ’s dugout and 2/Lt Burrell was badly wounded ( he has since died of wounds).  Shelling continued all day.  We were relieved by about midnight by 56th. Infants Bde. and reached Mamet Wood where we were to bivouac about 4 am on the 20th.

“20th July:  At 8.30 am we had orders to move up closer by about 1500 yards and S of Bazentin-le-Petit village.  Digging-in was again our most important occupation.  The 2/Argyll’s again attacked and gained an objective short of the German switch line.  Their losses were not heavy.  At the same time the 19th Bde. took High Wood.  We were relieved in the evening at about 11.30 and returned to bivouac just NE of Mamet Wood.  The 19th Bde. have been heavily counter-attacked and have lost part (the NE Corner) of High Wood.  They have 1500 All Ranks left.

“21 July: A quiet day.  Nothing happened until about 7 pm when we were shelled .  Later the shelling continued with gas shells, the cloud formed being very thick.  We were relieved about 10 pm by the 9th Division and marched to Dernacourt where the Bde. was billeted.  The gas was thick as far back as Fricourt.

“ Total casualties during the late tour in the line were:

It is not possible to be sure when William sustained his fatal wounds.  It is certainly likely that he will have survived the heavy losses in the attack on 15 July, and he is most likely to have succumbed to the heavy shelling occurring on 20/21 July.  His body was never recovered, and he is commemorated on the great Thiepval Memorial to the Missing of the Somme, who have no known grave.  His mother would have received his medals, the British War medal and the Victory medal, as his sole legatee.  He was unmarried.

William’s elder brother, Walter, survived the War.  He volunteered in 1914 and joined the 12th Rifle Brigade and eventually attached to the 9th Battalion of that Regiment.  He was wounded in 1915, but continued in active service until 1918.  He returned to his family of then six children, the youngest, Violet, being born in 1916.