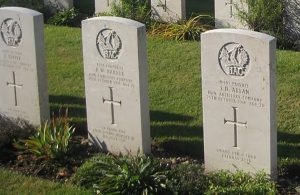 Bernard was the eldest son of three,  born of Caroline (“Carrie”) Barker, nee Whittenbury and her husband Allison Barker, (25), himself the third generation of Pianoforte builders and tuners.  The couple were married at St Paul’s Church, Grove Park on 18 November 1896, by the vicar, Revd. Samuel Bell.  Allison lived at the time at 5 Ranelagh Villas, and Carrie was the nineteen years old daughter of the proprietor of Grove Park Hotel, William Whittenbury.  Bernard was born on 14 August 1897, and baptised by Revd. Bell on 8 September.  After the marriage, the family had first set up home at 62 Wellesley Road, Gunnersbury.

Three years later, at the 1901 Census, the family was living at 36 Antrobus Road, South Acton.  William Allison Barker was born on 8 April 1901 and Leonard Harold was born on 9 June 1905.  It seems that it had been a very troubled marriage.  Indeed, Carrie petitioned for a Judicial Separation in 1909, citing violent and unreasonable conduct by her husband directed at her.  She obtained custody of her children and went to live at 13 Merton Avenue, Chiswick.  At the 1911 Census, she was there, together with William and Leonard, her sister Annie and two boarders.  Bernard (13), was away at school, lodging with his aunt and uncle in Welling, in Kent.

We know nothing of Bernard’s pre-war life.  As soon as he was able, at 18, he volunteered for War service.  We are fortunate to have access to his Service Record.  His Attestation is dated 10 November 1915 when he joined the 2/1 Battalion, The Honourable Artillery Company as Private 4935.  After training in England, the Battalion first saw active service at the Western Front on 4 October 1916 and was in action on 25 February 1917 at Bucquoy. They fought at the Battle of Arras in May and the 3rd Battle of Ypres in October.

Bernard was made an “unpaid” Lance Corporal in the field on 15 May 1917 during the Arras campaign.  He was confirmed in that rank soon after and after a ten-day period of home leave in August, in the October of that year he was Acting Corporal.

In November 1917, the battalion moved to the Italian Front as part of the 3 Division British component of the International Allied Force.  By 22 April Bernard had been appointed Acting Lance-Sergeant.  In June he was hospitalised with Influenza after which he had relinquished his role, reverting to Corporal.

In the Battle of Vittorio Veneto, in October 1918, the Battalion, as part of Lord Cavan’s 10th British-Italian Army, 14th British Corps, led a force of Italians, Americans and British that compelled the garrison of the strategic island of Papadopoli (in the main channel of the in-flood River Piave) to surrender. (For this remarkable feat of arms, the HAC was awarded two Distinguished Service Orders, five Military Crosses, three Distinguished Conduct Medals and 29 Military Medals).

It was during this campaign that Cpl. Bernard Whittenbury Barker was killed within days before the final armistice with the Austrians.  He was buried at the British Cemetery at Tezze, Plot III, A.7, close to Conegliano, in the area of the 10th Army’s advance. (see accompanying Map).  His mother Carrie caused to be inscribed on his headstone:

“In proud and ever loving memory of my dear son.”

He was aged 21, and unmarried.  Carrie received his British War and Victory medals.