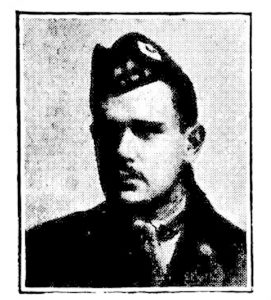 Lionel Beale Kyrle Collins, a solicitor, born in Newnham, Glos., the son of a surgeon, married Lallie Reed Watson in Kensington on 4 April 1888.  Their children were Lynn Beale Kyrle, Lila Constance, (1891), Stratford Justly Kyrle (1892) and Lionel Drummond Kyrle on 21 August 1983.  All the children were born in Georgetown, British Guiana.  Following the death of her husband in 1894, Lallie Collins with her children lived in Edinburgh for some years but eventually moved to London.  She was to be found in the 1911 census at the home of her sister-in-law, Constance Collins, also a widow, at 9 Esmond Road, Bedford Park, where Lila and Lionel also resided.  In 1914 they had moved to 48 Esmond Road.

Lionel Drummond Kyrle Collins, was educated at John Watson School in Edinburgh until 1907.  He then went to Framlingham College, Suffolk, where he became Colour Sergeant in the OTC, was a senior prefect and won colours for cricket and football.  He had gained certificates for swimming and life-saving.  In 1911, at aged 17, he is listed as a Bank Clerk.  At the time of his enlistment in 1914, he had been a junior stockbroker with Messrs. Wilkinson’s since 1912.

Lionel volunteered at Westminster on 2 September 1914.  He joined the 18th Battalion, Royal Fusiliers, one of the Public Schools battalions.  He was rapidly promoted, becoming a Sergeant – Instructor on 1 November 1914. He gained a commission in 3rd Battalion, Royal Scots Regiment in May 1915 and went to France that October attached to 13th battalion.

He had been offered the post of Bombing Instructor for the Brigade, but preferred to remain with his Battalion as Bombing Officer.  He was reported missing after the German attack on the Hohenzollern Redoubt on 12 May 1916, near Hulluch, when the Colonel and most of the senior officers were either killed or wounded.  A week afterwards his body was found at the entrance to a communication trench leading to a trench held by the enemy, his servant lying beside him.

He is buried at Vermelles British Cemetery.

The Colonel of the 18th Royal Fusiliers wrote: “He was with my battalion for many months and I had a very high opinion of him.  In fact, I offered him a commission with the battalion … He did his duty for his country and died a noble death.  He secured the love of all those in the 18th Fusiliers who knew him, and from what I can hear he was equally loved when with the Royal Scots … I thought you might like to know the feeling we had for him in his old regiment.”

A fellow officer from the Royal Scots: “Your son came out at the beginning of October to 13th Royal Scots, with whom I then was, and continued to be until November.  During that time I saw quite a lot of him and found him a most charming fellow-officer.  He was only with us six weeks  when I was invalided, but by then it was recognised on all hands that the battalion had had few so popular or conscientiously loyal officers.”

The senior partner at Wilkinson’s also wrote: “I am writing on behalf of us all … we have felt great pride in your son’s gallant conduct and excellent progress at the front, of which we have frequently heard.  His work while with us was full of promise for a successful business career, and we have missed him sadly since he left this place to fight for his country.”

Stratford Justly Kyrle Collins served in the Royal Horse Artillery during the War, rising to Major by the armistice.  After the War he worked in Argentina.  His elder brother Lynne Beale Kyrle became a tea planter in Assam, dying there in 1945.  Lallie Collins received Lionel’s medals, 1914 Star, War and Victory medals at her post-war address in Kensington.  She died in 1937 in Suffolk.