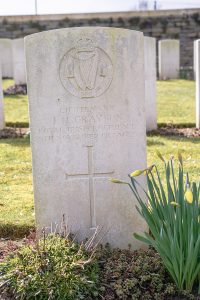 John Henry was born 9 May 1897 in Londonderry.  His father was John James Grayson, the second son of Captain John Robert Grayson, paymaster of the Bedfordshire Militia and his mother,Mother Margaret.  The family lived latterly at Delmaine, Malahide, Co. Dublin, though John James Grayson was an agent of the Bank of Ireland who had several postings in Ulster previously.   John Henry had elder sisters, Muriel and Evelyn Elizabeth.

2/Lieut. Grayson probably never resided at Bedford Park. He may have visited his Aunt, on his father’s side, Frances Annie Maud Grayson. She lived at 28 Queen Anne’s Gardens before her marriage with William Greenwell Lax, and whose son Anthony William Greenwell Lax also died in the Great War.

John Henry was at Queen’s University, Belfast, and served as a cadet in its OTC.  He volunteered and applied for a Commission on 3 August 1915 in Belfast, where he had been employed as a clerk for the Scottish Widows Fund Insurance Company.

The 6th (Service) Battalion, a.k.a. the 6th Leinster Regimentwas formed at Clonmel on 6 September 1914 as part of K2 and came under the orders of 47th Brigade, 16th (Irish) Division.2/Lt.John Henry Grayson was posted Temporary 2nd Lieutenant on 27 August 1915 (gazetted 28 August).

In December 1915 the unit landed at le Havre, concentrating in the Bethune area, and was in action near Loos until August 1916.   They then were sent to the Somme front, immediately engaging in the Battle of Guillemont, in which the Division captured the village.  Grayson was  wounded at Guillemont on 3 September 1916, suffering from a severe gunshot wound to his left thigh.  The War Diary for that day states:

“The Bn. advanced at 12.25 pm. to the attack on Guillemont and Sunken Road, which latter was their final objective. The Battalion went over the parapet with the pipes playing and the men went forward in excellent order.  The final objective was in our hands by about 3.00 pm. and the line was immediately consolidated and held in spite of three counter-attacks.  The casualties in the day’s fighting was heavy, being 14 Officers and 311 O Rs”

John Grayson had extensive home leave from 14.9.16 until 28 June 1917 before he was declared fit to return to his Battalion. The total Battalion casualties in the Somme during this period was 28 Officers and 451 Other Ranks.

In 1917, the Battalion fought at the Battle of Messines and the Battle of Langemark, during the 3rd Battle of Ypres before transferring again to France at the Bapaume area and the Bullecourt line in August.  In mid-November, The 47th Brigade prepared to mount the attack on Croisilles Heights. Although the Battalion was mostly in the rear as Brigade Reserve, Lieut. Grayson with “C” Company were on wiring duty during the consolidation process after the attack in front of “Tunnel Trench”, one of the primary objectives of it, when he was killed, presumably by sniper fire, or during one of the counter-attacks. Several Other Ranks in the wiring party were also killed with him.

He was buried at Croisilles Railway Cemetery, Croisilles, in Plot I.D.7.  His name is also commemorated on the Memorial at Queen’s University, Belfast.