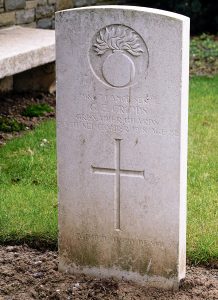 At the beginning of the War, in October 1914 George volunteered to serve in the Grenadier Guards, as Guardsman No. 19867 in the 1st. Battalion.  It had followed the 2nd. Battalion to Belgium in October, but George would have undergone intensive training before joining it on 26 June 1915. In early 1915 permission had been received for the formation of the Guards Division, and on 18 August 1915, it came into existence, consisting of three brigades, each with four battalions.  The 3rd Guards Brigade was formed at Lumbres, near St Omer, France on 15 August 1915.  The Division served on the Western Front for the duration of the War.  George’s Battalion had previously been in 20th Brigade, 7th. Division, but he may well have first seen active front-line service at the Battles of Loos and the Hohenzollern Redoubt as the 3rd. Guards Brigade.

From 1916 onwards the four service battalions of the Grenadiers fought in a number of significant battles including in the later stages of the Battle of the Somme, Third Battle of Ypres, including Passchendaele and Cambrai in 1917.  The latter half of the year of 1918 saw the return of the war of movement. The 3rd Guards Brigade had to withstand the German Spring Offensive in the First Battles of the Somme (1 – 25 March) then switched over to counter-attack in the Second Battles of the Somme (21 – 23 August), the Second Battle of Arras (26 August – 3 September) and the Battles of the Hindenburg Line (12 September – 12 October).  It is a reasonable assumption that George Edward Cripps would have participated in all these engagements.

It was at the commencement of Hindenburg Line campaign, at the Cambrai Offensive that Lance Serjeant Cripps was killed in the first day’s action.  His body rests at Sanders Keep Military Cemetery, alongside with no less that five others of his Battalion, at Graincourt-les-Havrincourt, at Plot III.A.1.  His headstone is inscribed, at his parents’ request, Faithful unto Death.  He was aged 22.  William and Katie Cripps would have received his campaign medals, the 1915 Star, British War Medal and Victory Medal.