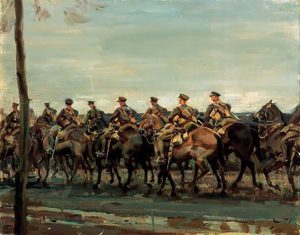 Thomas George was the youngest son of Thomas and Eleanor Annie Bavin.  The family
lived in Jersey Place, Cheltenham, where Thomas was born in about 1894.  His siblings were Eleanor G (1886), born in Upton, Essex and Ernest William (1888), born in Cheltenham.

In 1891, The father was a manager of a firm of wine merchants.  He died at the age of 35, being buried on 3 November 1894 in Cheltenham when Thomas was a small baby.  At the 1901 Census, the family had moved away, but Eleanor, and Thomas, now aged 7, were to be found as visitors at Sydenham Grove, Cheltenham at the home of friends, a bookseller, William G Cockett and his wife Lorina.  Ernest was at school as a boarder at St Oswald’s School, Ellesmere, Shropshire.

By 1911, the Bavin family was resident at 8 St Alban’s Avenue, Chiswick, with the exception of Ernest, who by then, at 23, had emigrated to Canada.  Thomas, 17, had a listed occupation of “Bank Student”.  In 1912, the family of three travelled on S.S. Corinthian to Quebec, the two Eleanors as tourists; Thomas intended to take up permanent residence, joining his brother.  Initially he worked as a commercial traveller in Canada, though he eventually joined the North West Mounted Police.  Mrs. Bavin and her daughter returned to St Alban’s Avenue and there are several entries in the St Michael’s Parish magazine concerning her volunteer activity in the church, assisting at Jumble Sales, in aid of the St Michael’s Mission.  She organised a stall for children’s clothing, and also helped with church flowers.

When the War came, Thomas Bavin joined Lord Strathcona’s Horse as a Trooper.  This regiment, which had close links with the NWMP, (later the Royal Canadian Mounted Police, (“The Mounties”) was placed on active service at the start of the Great War on 6 August 1914.  It mobilized as Lord Strathcona’s Horse (Royal Canadians), CEF, which embarked for England on 3 October 1914. It first disembarked in France on 5 May 1915, where it fought dismounted in an infantry role with “Seeley’s Detachment” (really the Canadian Cavalry Brigade, part of the 2nd Indian Cavalry Division), 1st Canadian Division.  On 27 January 1916, the regiment remounted and resumed its cavalry role as part of the 1st Canadian Cavalry Brigade, 5th Cavalry Division with whom it continued to fight in France and Flanders until the end of the war.  Thomas Bavin’s name does not appear on the Regiment’s Nominal Roll dated 1915, although he volunteered later in that year, and formally attested on 7 January 1916.  Among the regimental honours in France and Flanders 1916–18, were The Battle of the Somme 1916 and Cambrai, 1917.

Thomas Bavin arrived back in England on 31 January 1916 and he first embarked for France on 21 May being formally taken on the strength of the regiment on 31 May, in preparation for the huge Offensive that began on 1 July.  It was a frustrating time for the Cavalry – the Infantry assault was ineffective in most parts of the Somme front, so that Cavalry activity consisted mainly of small and infrequent raids on enemy trenches.  Much of the rest of the year and the Winter was spent in the rear, in the training grounds near the coast,  mainly at Bethencourt sur Mer.

In 1917, once again, the Canadian Cavalry Brigade remained under-utilised.  Much of the Summer was occupied at the rear, exercising and feeding the horses and it was really Autumn before they began to scent some action.  But it was only in November that they briefly came into their own, in the allied Offensive that culminated in the Battles of Cambrai.  All the regiments in the Brigade took part, The Royal Canadian Dragoons, the Fort Garry Horse and the Lord Strathcona’s.

Trooper Bavin would have participated in both of the battles.  The high point for the Lord Strathcona’s was at the conclusion of the First Battle, on 21 November, when the Brigade supported the Infantry and Armoured squadrons that succeeded in establishing a bridgehead at Masnieres.  A tank had attempted to cross the canal and collapsed the bridge, and the LSH were ordered to reinforce the Engineers re-establishing the crossing against continuing German counterattacks.  They patrolled the town dismounted and cleared out pockets of resistance.  In the meantime, squadrons from Fort Garry Horse penetrated forward as far as Rumilly but had to retire for lack of support.   A strong counterattack late in the day heavy shelling killed 5 and injured 6 horses.  There was no further opportunity to press on to the planned objective of Rumilly.  The LSH were retired to the rear, with the intention of wintering at Montecourt.

However, 1 December saw the Germans’ big Counter Offensive which effectively re-took the ground gained by the British 10 days before.  The Lord Strathcona’s were ordered forward again to stiffen the resistance at Gauche Wood south of Gouzeaucourt, behind the original British front line on 21 November.  The regiment fought doggedly and succeeded in maintaining the line.  The War diary (on a separate page) describes the various squadrons’ actions.

We do not know in which squadron Thomas Bavin served, but he was killed during the fierce fighting of the day.  His body was never recovered.  He is commemorated at the great monument at Vimy.  The Parish Magazine in January 1918 noted:

“During the past month, Dunckley, Bavin, Taylor and Tolson have been reported as killed – Bavin came all the way from Canada, although his mother is resident among us, and a Church worker.”

Eleanor Bavin will have received her son’s British War and Victory medals.  Ernest Bavin also served, and survived the War.