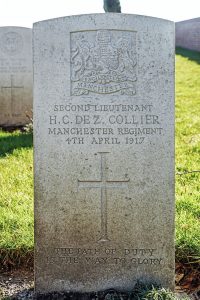 The Collier family is to be found in the 1901 Census at Devon Cottage, Blackheath Park, Charlton.  Robert William Collier b.1855 was an architect, married to Rosa Mary Collier, b.1865.  In 1891 they had lived in Dorking, Surrey.  Their Children were: Sophia Rosa born in Dorking in 1889;  she sadly died at Woodbridge, Sussex at the age of 14 in 1904.  The second was Violet C , b. 1891 who married Gerard Koop in Kensington in 1912.  The eldest son, John, born 1892  married Maud Hine in 1928.  He died in 1944, aged 51.  In the early years after WW1 he is recorded as 4th Officer on the passenger ship Orbita, that regularly traversed the Atlantic to New York from Southampton and Hamburg.  The youngest was Hubert Charles deZoete, b. 1897.

In about 1912, the family of 4 moved to 25 Woodstock Road, Bedford Park.  They were there at the outset of the War.  Robert and Rosa remained in Bedford Park until Robert’s death in 1923, after which Rosa moved to Kingswood, Gloucestershire where she remained until her own death in 1944 at age 75.

It appears that from Autumn term 1910, at the age of 13, Herbert was a pupil at Denstone College, Derbyshire, in Clark’s House. It is not clear for how long his schooling there was.  It seems likely that he would have remained there until the War commenced.  In any event, the London Gazette records his appointment as 2nd. Lieutenant, 3rd Battalion, Manchester Regiment in July 1915, having previously received training as an OTC cadet, presumably at School.  His Medal card indicates that he initially volunteered as a Private, No. 2290, 10th Battalion, Royal Fusiliers before applying for his commission.

10th Battalion, The Royal Fusiliers (City of London Regiment) was raised in the City of London in August 1914 as an independent unit nick-named The Stockbroker’s Battalion.  In September 1914 it joined 54th Brigade, 18th (Eastern) Division in the Colchester area, as part of Kitchener’s Second New Army.   It seems very unlikely that Hubert will have seen active service before transferring for Officer training, because in March 1915 the 10th Fusiliers transferred to 111th Brigade, 37th Division, moving in April to Salisbury Plain where the division was concentrating.

The 3rd  Battalion Manchester Regiment was a training unit whose members would have been transferred to service and territorial units during the course of the war.  Ultimately, Hubert had been attached to the 91st Trench Mortar Battery which was part of the 91st Brigade, 7th Division in which were also the 21st and 22nd Manchester Infantry Battalions.  In 1916 They were in action during the Battles of the Somme, including the capture Mametz, The Battle of Bazentin, the attacks on High Wood, The Battle of Delville Wood, The Battle of Guillemont and the Operations on the Ancre.  In 1917 they fought during The German retreat to the Hindenburg Line and the flanking operations round Bullecourt during The Arras Offensive.

At the age of 20 Hubert was killed in action on 4th April 1917, and is buried at Euston Road Cemetery, Colincamps, Somme, Plot ref. V.H.10   After the war his mother caused an inscription to be engraved on his headstone: “The Path of Duty is the Way to Glory”.

His name is not included in the Roll of Honour at Denstone College.