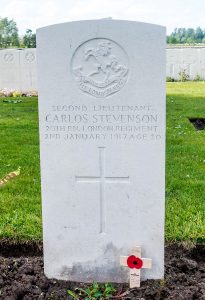 Carlos was born in Salto, Uruguay on 29 June 1896; his parents were Dr Carlos and Elizabeth Annie Stevenson (nee Prat Gremstral).  At some time prior to 1911 Dr. Stevenson died, and the family came to England.  At the 1911 Census, Elizabeth, who was born in Thanet, Kent in 1871, was to be found at lodgings managed by a Mrs. A McMullan at 10 Trebovir Road, Earls Court.  Carlos’ sister, Juanita Ana Filey Stevenson, aged 19, born in Villarica, Paraguay was resident there as well, but Carlos was presumably at boarding school at that time.  We know that he attended Sevenoaks School.  Eventually, Mrs. Stevenson resided at 52 Abinger Road, Bedford Park, Chiswick.  Apart from the military service of Carlos it has not been possible to discover anything else regarding the family.

Carlos joined as Private 1754 by Christmas 1914 in the London Irish Rifles  according to the Sevenoaks School magazine of that date, and the entry in his medal card.  That unit went to France in 1915, and the medal card suggests it was on 9 March that Carlos joined the BEF.  The unit was first in battle at Festubert in May 1915, but it is not clear whether by then he had been selected for officer training.  The 18th formed part of the 141st. Brigade as well, in any event.  His commission  dated 12 October was gazetted on 25 October 1915.  It was probably from that date that he was transferred to the 20th Battalion.  He would have missed service at Loos as a result of this promotion.

The first mention of Carlos in the 20th Battalion Diary arises in September 1916 in relation to the successful 47th Division attack on High Wood  on the 15th. starting at NE corner of Mametz Wood in which four “tanks” (the new British secret weapon) were deployed :

“ At 1.00 am moved off by platoons in file and took up positions in shell holes and open ground on slope of High Wood behind support line.  Passed new armoured cars on the way up.  No casualties.  ‘A’ Coy. remained with Battn. HQ in CHESTER STREET.  19th London also took up position in front of us and on same ground.  17th and 18th Londons had gone up previously and taken over the line from 143 Bde.  140th Bde. took up position on our right – 50th Divn. was on our  left.

4.45 am HQ moved up to support line.  Combined Battn. HQ was formed in one dugout.

6 am  17th and 18th Londons attempted to lie out in front of their front line so that 19th and 20th London could come up and take their places but owing to growing light, were seen and fired on suffering heavy losses.  2 armoured cars moved forward through wood.

6.20 am  19th and 20th Londons moved up but found 17th and 18th London had not evacuatedtheir trenches so had to get into support trenches already crowded with HQ staff, signallers, runners etc. and most of the men laid down along the edge of the wood.  These also lost heavily having been seen.

6.20 am “ZERO”  Attack could not proceed owing to heavy MG, rifle and shrapnel fire.  One armoured car broke the axle of its rear wheels in manoeuvring through the continuous line of shell holes and torn undergrowth and could not get forward so stayed and effectively used its Hotchkiss 6 pdr. and MGs.  The other Armoured Car manoeuvred badly along the GERMAN SWITCH LINE and stuck there.  Later the crew set fire to it and left.

9.00 am  Col. HAMILTON of 19th London killed in attempting to lead some of his men forward.

11.30 am  Barrage lifted and Capt. READ with 2 platoons moved into these trenches.

2/Lt. NELSON brought up more men as soon as he could and then all moved forward and blocked the trenches where they entered the wood.  Cant. HUTCHISON and Major TRINDER  of 18th London then advanced from the front line (Mjr TRINDER was killed in doing this).  The two parties worked towards each other and the enemy garrison surrendered.  2/Lts. MAXWELL and NELSON bombed down enemy trenches and cleared the wood entirely.  (2/Lt MAXWELL was wounded badly doing this).  Capt. READ then gathered some men together of all Battalions in the Bde. and went forward  and took up a line in front of HIGH WOOD some 100 yards away, having received an order from Bde.not to go on to STARFISH LINE which was his intention of doing.

The rest of the day was spent on digging in under heavy fire and ‘A’ Coy. was sent to the right to link up with the 140th Bde. and lost heavily in doing so.”

In this action, about 500 prisoners were taken by the Division.  The enemy casualties were very heavy.  High Wood remained firmly in British hands thereafter.  Within the battalion 13 Officers and about 250 men were killed, wounded or missing: 2/Lt STEVENSON was wounded but returned to duty the next day.

The battalion was in action again on 1 October.   After a preliminary prolonged bombardment of FLERS, FLERS SUPPORT LINES and EAUCOURT L’ABBAYE, 17th, 19th and 20th London Battalions with Anzacs on right with 50th Division on left attacked in four waves on a four Company frontage advancing under a creeping barrage.  The first two waves of 19th and 20th reached their final objective and dug in on the farther side of EAUCOURT L’ABBAYE.  The third and 4th waves of the same battalions remained in the FLERS line, and dug in but were bombed back 100 yards by a small party of the enemy that had been overlooked.  Two tanks cooperated and advanced along the FLERS and FLERS SUPPORT LINES and arrived about the centre of the abbey when they saw troops on our left in retreat.  The occupants set fire to their tanks and left.  A block was formed in the FLERS line and held by our bombers and one trench mortar.  During the night of 2 October the remaining enemy garrison of the FLERS line evacuated over the top and were shot down by our advanced troops, i.e. Lieut. NEEDHAM LW and 2/Lieut. STEELE EG with two platoons of D Coy and the remainder of A Coy together with remnants of 19th Londons.  During the day the 18th Londons occupied the FLERS line and pushed troops round the outskirts of EAUCOURT L’ABBAYE connecting up with our advanced troops.  They also were in touch with 50th Division by a line of outposts on our left.  The 17th Londons came up and occupied the FLERS SUPPORT line.  By this time consolidation with the forward troops had progressed considerably.  On 4 October the battalion was relieved and withdrew to BLACK WOOD near ALBERT.

The battalion’s tour in the Somme front was effectively finished. It left ALBERT on 14 October, and was transferred to the Flanders area at Ottawa Camp POPERINGHE by 20 October.  It resumed front line duty in the right sub-section of the YPRES SALIENT on 29/30 October.  Trenches were in very bad state of repair in very bad weather.  Tours of front line duties in the Salient continued during November and December.  Much work was taken up by repair of trenches, and by precautionary work of explosion of Camouflets in areas of suspected enemy mining activity.

1 January 1917 saw further duty in Ypres Salient, Canal subsection, right section:   According to the Battalion War Diary,  “Considerable aeroplane activity till 11 am.  During afternoon enemy TM’d BLUFF and CRATERS heavily, with retaliation by Divisional and Corps artillery.  At 5.35 pm enemy turned on a very heavy barrage  until 7 pm but the reason for this strafe was unclear.  On 2 January large working parties were occupied in clearing damaged trenches.  Communication with CRATERS was reestablished during the day.  Enemy TMs not as active as usual and was noticed to be clearing his lines where damaged by previous day’s strafe.

“On 3 January, the work of clearing and repairing the line carried on.  One clearing party was observed by enemy and LHV’d causing three casualties, including 2/Lt STEVENSON, who was killed in B Crater.  The battalion was relieved by 19/Londons at 9.50 pm.”

Dowload a zip file of these images