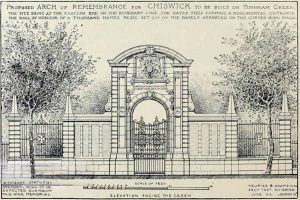 After the War was ended, the Brentford and Chiswick Urban District Council considered how it should appropriately commemorate the victory and its Roll of Honour of war dead. Rejecting the suggestion of a sunken bandstand on Turnham Green, the Council decided to build more almshouses – the War Memorial Homes of Rest off Burlington Lane – and to erect a memorial arch on the Green, designed by Maurice B. Adams.

In July 1919, the Building News (edited by Maurice Adams, coincidentally a former St Michael and All Angels’s churchwarden) noted that “The site decided on for this war memorial is an 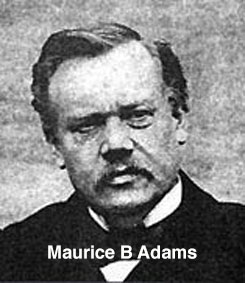 ideal one, and the arch will form a monumental entrance at the eastern end of Turnham Green. Coming from London along the Chiswick High Road on the way to Kew, the monument will be seen from some considerable distance prominently rising at the end of the vista, with the tall spire of Sir Gilbert Scott’s early church in the middle of “The Green,” well surrounded by trees, the group composing finely against the western sky, or when viewed from the other prospect, returning from Gunnersbury, the arch will stand out well in contrast to Sanderson’s white glazed brick wall-paper factory building near the top of the Duke’s Avenue”.

It was an ambitious concept. There were to be segmental wing walls to the “Victory” arch, tabulated by a Roll of Honour of a thousand names set out on monolith panels (see drawing).
The architect sought to reduce cost by limiting the depth of the structure in plan view, making its proposed height a virtue by being in proportion with the “eminent steeple close by, in the middle distance”. There were to be heraldic panels on both facades, designed for bronze, with a “surmounting bronze statue of ‘Victory’ by a first-rate sculptor”.

But it was not to be. Public subscriptions for this somewhat grandiose proposal proved insufficient, and a more modest memorial was erected instead. The substantive memorial to the fallen of the First World War was designed by Edward Willis FSI, Engineer and Architect to the Chiswick Urban District Council, and built by Messrs Fenning and Co of Hammersmith. It is a granite memorial obelisk set within a square of paving on top of a mound. The original yew planting remains from the early landscaping although the original railings around the base of the mound have now been lost. 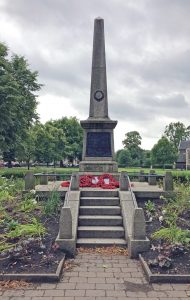 The memorial was unveiled on 13 November 1921 at a ceremony presided over by the Duke of Devonshire and the Bishop of London. Willis was also responsible for the design of the Memorial Fund’s Chiswick War Memorial Rest Homes, Burlington Lane, Chiswick. Housing disabled servicemen and their dependents, these were completed in the same year and opened on 17 July 1922. This part of the memorial was re-dedicated by HRH The Countess of Wessex GCVO on 11th November 2010 following the redevelopment of The Chiswick War Memorial Homes.

The Brave Mother who lost three of her Sons

In 1911 Jane Gould worked as an Ironer in a laundry, and her husband remained a general labourer. By then the family that remained at home were at 8 Bond Street, Chiswick. They had 4 rooms, shared by 7 family occupants – 3 male, 4 female. Grandmother Jane Powell had died. It seems the family moved after the war to Hunt Street, Chiswick.

At the unveiling ceremony on 13 November 1921, Mrs. Gould was selected to lay the official wreath in honour of the Chiswick fallen, because she had lost no less than three of her four sons. The Chiswick Times reported:

“… A BRAVE MOTHER’S PART
During the singing of the hymn “Jesu, lover of my soul” came one of the most poignant moments of the whole ceremony. Church and State had been represented in all their pomp and dignity up to this point and done their part with that finished oratory and reverence expected of them.
Now there comes upon the scene a lonely figure of a woman dressed in black, the while a sob breaks the regularity of the rhythm in the words of the well-known hymn, this mother of sons who has known what it is to offer her beloved boys in the cause of freedom and justice, places at the base of the monument a beautiful wreath in the name, and expressive of the thoughts of the whole people of Chiswick. Duke and Bishop stand aside, and give place of honour to this representative of the brave mothers of Chiswick, hundreds of whom are standing around with tear-filled eyes as they think of the loved ones who sleep on their lonely beds yonder. Reverently the wreath is laid in its place by Mrs. Gould, a resident of Hunt Street, who lost three sons in the war. Her duty ended, the bishop gives her a warm shake of the hands and says a few words of comfort whilst the Duke of Devonshire also expresses his sympathy. It is an impressive moment, and the concluding words of the grand old hymn are almost inaudible, such is the effect upon the onlooking crowds.
The inscription on this wreath was:-
“In honour of the Chiswick dead, from the Chiswick War Memorial Fund Committee, on behalf of all the inhabitants of Chiswick.”